Elephants, leopards, lions? What would we find in Iluma? The search is on to discover the best of Africa’s biodiversity in a key Wildlife Management Area (WMA). It would be an exciting project in an area with the Kilombero river running through its heart on the border of the Selous Game Reserve.

This week the Kilombero Valley Ornithological Center (KVOC) embarked on a new project – undertaking a biodiversity census of the Iluma WMA. Having temporarily terminated their work with the Kilombero Valley Teak Company (KVTC), KVOC began a new project in collaboration with the Tanzanian government to assess the wildlife of an important WMA -Iluma. Situated in the heart of the Kilombero valley and within close proximity of South-eastern Tanzania’s trio of major protected areas (Mikumi National Park, Udzungwa Mountains National Park and Selous Game Reserve), Iluma is believed to hold a rich array of fauna and flora. It was our job to discover what actually lives there.

The main vertebrate groups, fish excepting, were to be our focus with carnivores, large mammals, birds, reptiles and amphibians all surveyed. Before we began our assessment, we were invited to look at our new study site. Instantly, we discovered this area harvested a greater quantity of animals with zebras, warthogs and duikers all easily visible.

As animals were clearly on display, we decided to modify our census techniques from our work with KVTC. Instead of simply using indirect signs to detect the presence of large mammals, we decided to combine this data with direct observations. In an attempt to quantify populations, we decided to employ distance sampling methods for large mammals, a technique I had learnt on a recent field trip to Kenya as part of my Master’s. This method would involve game drives through the area, counting each mammal we observe and estimating its distance from the road. These drives would be combined with carnivore transects too, as we searched for tracks along the road – their predominant pathways. The installation of camera traps in the area would also highlight the presence of more secretive animals, both herbivores and carnivores, whilst night drives would be used to find those nocturnal animals that remain inactive at daytime, especially carnivores.

Alongside these mammalian surveys, we would continue our bird surveys, using visual and audio cues to detect the species in the area. Herpetofaunal surveys will also to be undertaken, with pitfall traps and perspection surveys the main method to identify amphibians and reptiles.

Our first week of surveys saw us located near to the Kilombero river. It provided a beautiful backdrop to our campsite and a great source of wildlife with hippos and Nile crocodiles on display. The area also lived up to its reputation of being an important bird area, with numerous species to be discovered. Weavers, bee-eaters, kingfishers, hornbills, egrets, ibises, flycatchers and rollers were just some of the groups present. We were also treated to a superb sighting of a pair of African fish eagles with their young. A rare grey go-away bird with its wonderful call also made an appearance. The most special of sightings must be the group of African skimmers that flew elegantly close to the river’s surface in search of their next meal. These birds have become very rare in the area, with our team leader, Sebastian, last seeing this species almost ten years ago despite being a permanent resident in the valley! We were very lucky to see them indeed and provided much promise for the biodiversity supported by the area.

As the week began to progress, our surveys began to reveal promising signs about the health of the wildlife in the area. Along our transects we discovered signs for the presence of several key carnivores: leopard scat, hyena tracks and a sighting of an African civet during the night. Many herbivorous mammals were seen during our game drives, including zebras, hartebeest, common duikers, dik-dik, and impala, whilst others were revealed by the camera traps, such as red duikers, suni, bushpig and bushbuck. A range of frog species could be found inhabiting the ponds, whilst a range of lizards were found within the drier forests, including the beautiful blue-tailed gliding lizard. The stand-our highlight overall must be the sighting of four elephants during our night drive, though. It was great to see this animals outside of a national park, such a rare event for most visitors to Africa these days.

Our first week of fieldwork has already revealed a rich array of animals that inhabit the Iluma WMA. Early signs that this area is thriving are promising, but only time will tell whether the area is in good health or not as we continue to survey the WMA. This new project will involve fieldwork until the end of December, meaning I will have left the country by the project’s end. In the meantime though, it will be exciting to help census the area and identify whether this area could become an extension of the Selous Game Reserve, or even a potential new national park!

Some of the more secretive animals were detected by our camera traps. A red duiker. Photo copyright: KVOC 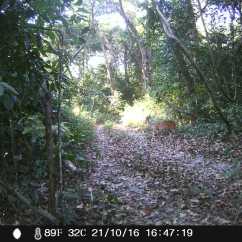 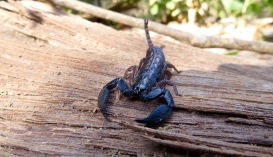 Although not a main focus of our study, we found some cool invertebrates in the Iluma Wildlife Management Area. Photo copyright: David Bartholomew

The enchanted forests of Wayqecha 🌳🌿
Introducing the cloud curtain. What happens when you remove cloud from the cloud forest? A giant curtain has been installed at 3000m in the Peruvian Andes to remove fog from the forest. Over the next month, I'll find out how changes in fog formation affects tree carbon metabolism and storage.
I'm back in the forest for more field research. This time I've swapped the lowland rainforest for the mountains. Not a bad view to wake up to each morning.
#LEAFlaunch
How will seedling dynamics change with logging in tropical rainforests? Check out my blog about my recent fieldwork in Borneo as we try to answer this question.
Rainforests play a crucial role in the water cycle with enormous quantities of water recycled into the atmosphere via evapotranspiration. This phenomenon is most visible early in the morning when the temperature is cool enough for mist to form in the air before the tropical sun evaporates it into water vapour. Photo taken during the recent field campaign in Danum Valley.